Approved by COSEWIC in November 2017

The following guidelines outline how sensitive information held by or generated by COSEWIC may be protected.

In cases where information related to the location of a wildlife species or its habitat is considered sensitive but essential to the understanding of the status report during COSEWIC review and assessment process, such sensitive information must be included in the status report. It is possible to limit the specific information that is published on the public registry. The Chair of COSEWIC can advise the federal Minister of Environment and Climate Change, via correspondence with the Director General of the Canadian Wildlife Service, to redact specific information from the status report related to the location of the wildlife species or its habitat. This is done on the recommendation of the relevant SSC Co-chair. Relevant Species Specialist Co-chair and jurisdictional members will be copied, as appropriate, on this correspondence.

“The Minister, on the advice of COSEWIC, may restrict the release of any information required to be included in the public registry if that information relates to location of a wildlife species or its habitat and restricting its release would be in the best interest of the species”.

It is suggested that COSEWIC determine, during the assessment process, if such advice should be provided to the federal Minister of Environment and Climate Change. Such advice should be included in the COSEWIC’s annual report to the CESCC and the Minister that includes the wildlife species in question.

Such information is maintained in the files of SSC Co-chairs and/or COSEWIC Secretariat. This information may be released upon request, with the permission from the Chair of COSEWIC on the recommendation of the relevant Co-chair as detailed in Part 2, sections A and B.

The identification of data sensitive species.

What is the risk that broad publication of information on a species location affects its survival or recovery for each of the following categories of threats?

Circumstances and intensity of collecting

2. Disturbance by observation (any observation or related activity that has the potential to disturb or destroy individuals or habitat components)

Public or media interest devoted to the species

Species’ vulnerability to observation or manipulation

Needed degree of proximity for observation

Situations that can result in reduced collaboration from partners

6. Do you think that an eventual at-risk status will intensify or reduce the risk associated in any of the five previous categories?

The results are reported in the Excel spreadsheet (Table 1.1). In cases where there is more than one threat in a category, only the highest risk should be noted. For instance, hunting and collecting would be considered two different risk factors (or threats) of the category “Capture/harvest of individuals”. If there are any regional or population differences in category of risk, it is recommended that the assessment be based on the impact on the survival or recovery of the species. The precautionary principle should also guide the decision when this happens. 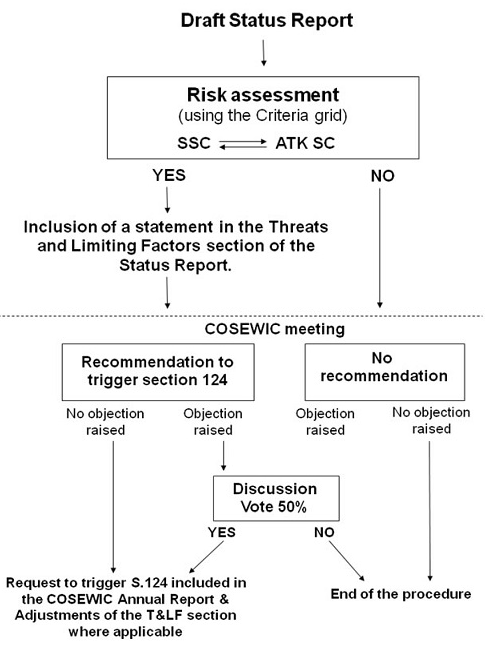 A. When a request to release information is filed at the COSEWIC Secretariat under the Federal Access to Information Act (ATIP or ATIA)

The COSEWIC Secretariat, being funded by and operating under a Federal department, is subject to requests for information under the Federal Access to Information Act (ATIP or ATIA).

When such a request is made, the Secretariat, in communication with the Chair of COSEWIC, will review what is being requested for release. The information requested to be released may include but is not limited to the following: sensitive appendices describing specific locations of a wildlife species, data used to prepare wildlife species distribution maps, status reports in all stages of preparation, and related correspondence on file, e-mail correspondence, meeting notes and minutes (see also Part 3 for guidelines associated with COSEWIC communications).

Not all of the information maintained in files at the Secretariat will be subject to release. The COSEWIC Secretariat, on behalf of COSEWIC, may restrict the information requested for release by using, as applicable, exceptions under the Federal Access to Information Act, and by referring to guidelines for reports finalized under the “old” and “new” system, as detailed below.

B. Other types of requests for information associated with status reports received by the Chair of COSEWIC or the COSEWIC Secretariat (e.g., non-ATIP requests).

The release/ sharing of sensitive information (as defined above) archived at the COSEWIC Secretariat must be authorized by the Chair of COSEWIC on the recommendation of the respective SSC Co-chairs, in all situations except when the request for information is made by the writer of the status report. Prior to approval and release, applicants must provide a written statement of the need and use for this data and agree to safeguard site information so that it is not released into the public domain.

For COSEWIC to operative effectively as a national science advisory body, confidentiality is vital to its deliberations and discussions. In part, this is because of the sensitive nature of COSEWIC’s recommendations to the federal government that can have significant socio-economic consequences for various sectors of society. Just as importantly, however, is the need for COSEWIC to provide a confidential forum in which a wide breadth of perspectives can be presented on various issues without threat of recrimination from one's employer1.

Sensitive information may include COSEWIC and SSC meeting minutes and notes, summaries of information and COSEWIC internal communications by e-mail (including letters prepared by or received by the Secretariat for the Chair and/or the Committee). Similarly, the e-mail correspondence among members of COSEWIC (including SSC members) is of a confidential nature. The correspondence may pertain to the initial deliberations of an internal Working Group of COSEWIC, or discussions between SSC members or with the Chair.

In most cases, the Aboriginal Traditional Knowledge collected, verified and included in the status report, will be obtained in confidence and therefore details of the ATK will be protected from public release.

(1) Members of COSEWIC are appointed individually by the federal Minister of Environment and Climate Change and, in accordance with Section 16(6) of SARA, shall make their own judgments and decisions independently of the government, academic, industrial, or NGO department of which they are a part.

The Committee on the Status of Endangered Wildlife in Canada (COSEWIC) is an independent advisory panel to the Minister of Environment and Climate Change Canada that meets twice a year to assess the status of wildlife species at risk of extinction. Members are wildlife biology experts from academia, government, non-governmental organizations and the private sector responsible for designating wildlife species in danger of disappearing from Canada.